Today – the weather gods having granted us a brief Israeli/Hamas style ceasefire before the hostilities resume tomorrow – I’ve been busy in the garden. Following your advice (which mostly amounted to ‘grow what you like to eat, duh’) I have planned out my planting, got some seeds ordered, and started digging. I’m doing my own half-arsed version of raised beds as I don’t really feel that my informal arrangement to have a corner of my landlord’s garden justifies the sort of semi-permanent construction that proper raised beds require  (no doubt I’ll still be saying this in ten years’ time).

So, for the rabid gardeners among you here’s the progress to date, complete with planting plan in which you can see just how limited the range of my vegetable diet is:

(there will be garlic dotted about, and tomatoes in pots, and squash in the cold frame too)

And meanwhile I have also been planting these:

Yes, sticks. But not just any sticks, because these ones (if Homebase are to be believed) will magically turn themselves into raspberry canes. The last time I planted raspberries I paid a fiver for a bundle of canes in Woolies. As these produced enough fruit for us to have raspberries every day for a month each summer for five years, I think that that was pound for pound the best investment I have ever made. These cost ten quid on special offer, so perhaps the Bank of England would care to bung another couple of fivers my way, and I will see if I can repeat the trick? It’s got to beat toxic mortgages and bailing out car manufacturers as an investment, and I promise not to pay myself any bonuses, although I will probably eat all the profits.

‘Ramp ahead’ said the sign. Now often when a sign says ‘ramp’ that usually means something completely different to the thing we ordinary civilians mean by ramp – a bit of a step up or down in the road surface (or even an enormous chasm in the road) but this was a proper ramp. It was at the point where the road passed through a farm yard and the farmer was pumping some sort of agricultural substance from one part to the other and a nice steep metal ramp had been placed going over the hose. On the way out, going up the hill, this was merely a pain. But coming back, accelerating down the hill, it became something else entirely. It became a jump.

My outer thirty-*cough*-year-old was reaching for the brake as I realised this, but it seemed my inner twelve-year-old was in charge of the pedals and still accelerating. Sadly, some caution kicked in at the last minute and I didn’t get a lot of air – but if it’s still there next week, I’ll have to have another go. And properly this time.

Helmet? Why on earth would I want to wear a helmet? 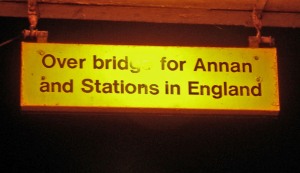 Over bridge for Annan and Stations in England

Why anyone might think the Scots a bit parochial at times, I don’t know…

You’ll have to excuse the poor quality of the shot – taken a little furtively in case I had to explain to someone why I find the sign amusing. And the lazy blogging of late – I’ve actually had too much to do, and none of it blog-worthy. Back on the bike, I hope, tomorrow, with more adventures to share.

In fact, this is the view at high (or rather low) noon – when it’s foggy here it’s not your wimpy southern early morning mist that clears to a fine day, it’s a proper pea-souper that hangs around basically for ever.

We got out and crossed the road, wrapped up against the cold, but we didn’t have to wait long. As the sky darkened, the starlings came over in their hundreds and then their thousands, joining the gathering throng. They swirled like smoke, the flock thickening and stretching out, undulating in a whip-crack of birds that must have been a good mile long. A lone buzzard, confused by all the choice, made no attempt to have a go at this all-you-can-eat bird buffet. Even a peregrine has trouble picking out its supper from a flock like this and the buzzard knew when he was beaten. Sometimes the flock would bunch and seem to form a solid shape: as though at any moment they might make an arrow, Disney style, or a hammer and anvil, or spell out words. Sometimes a swirl would form, accelerating round and down, beginning to settle on the trees. We waited till it was almost dark, until the last few squadrons had cruised in, hedge-hopping, to settle in the trees. And then we trickled back to our waiting cars, sharing experiences with the others there.

We’d missed the best of it, apparently – the birds had moved from one small woodland to another and so we didn’t get the rush of noise and air (and worse) from having them right overhead. But it was pretty spectacular all the same. I’ve seen a starling roosting flight before – hell, I’ve written about one. But this was something else.  One day, when I have worked out how, I might well post a video. For now, here’s someone else’s to give you a pale shadow of an idea of what it might be like. Or get yourself to Gretna Green at dusk, and see it for yourself.

*and if you know otherwise, please keep it to yourself.

Putting the Burn into Burns Night

Because setting fire to things beats haggis any day

I Love it When…

Back on the Bike

I haven’t been on the bike for over a week, partly because the weather has been beyond atrocious – ludicrously awful with gales, sleet, snow, fog, bucketing rain and at least half an inch of hailstones yesterday. Partly also because I’ve been trying to get my driving going again which meant some practice sessions in the new car with the other half. These did not go particularly well: the best that could be said for my first outing was that I didn’t hit anything. As for the rest – well by the end the other half was only going ‘Jeeeeesus Christ’ three or four times a session, which I count as an improvement, although it could have been because he had his eyes covered and was cowering in the back. But anyway, I have done the driving that I needed to do and today, it being fine and breezy, I was back on the bike to the relief of all concerned.

My route took me past the scene of the mysterious pipe and bucket combo, and I can now report that there have been developments. The bucket has gone and been replaced with … 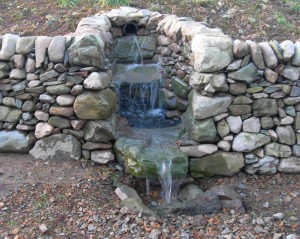 Now you might think – given that this – rather impressive – construction is effectively in the middle of nowhere and certainly nowhere near any house or garden, that the mystery continues. But, having had to give directions around here it makes perfect sense to me. You see the landscape around us, while beautiful, consists of the same few elements – drystane dyke, church, cottage, farmhouse, barn, field, plantation forest, bridge, stand of trees, hill – repeated over and over. The roads are almost all un-named and un-numbered and the signposting tends towards the erratic. If you see a sign to where you’re going at one junction then you can be fairly certain that at the next junction, there will be no mention of your destination, and half the little roads around here get no sign posts at all. Directions tend to be of the ‘go 3.8 miles along the road until you come to a track, go up it and take the ninth left, and if you reach the sea you’ve gone too far’ kind. A couple of weeks ago, in the fog, we had to go out and rescue someone who had got so lost trying to find us that she had almost given up. And she had lived in the area for years…

So if you live down an un-named road, off another un-named road, off a third un-named road, in the land that signposts forgot, then building something like this at the end of your road makes perfect sense. Because with ‘Turn left at the big water feature’ there’s  no chance of there being another one of those around. Or at least until the idea catches on, and everyone has one.

I still don’t think it adequately explains the bucket, though.

Phew. Rayburn man came yesterday and degunked the Rayburn, and its temperature had finally crept back up to normal. We’ve solemnly promised not to turn it down lower than ‘2’ in future (makes you wonder why they bother to have a ‘1’) and shall be laying offerings before it diligently every morning to make sure it doesn’t get angry or sick again. The writings of G***** M****** will also be excised from the Guardian and burnt (if we can ever get them to light) before bringing the paper into the house.

Actually, what this has done is prove that – as far as our little Rayburn goes at least – Mr M****** was completely wrong. If the last few days have been anything to go by, running the Rayburn  actually saves us oil. Without it we’ve had to have the heating on much more (it was 12°C in the kitchen yesterday morning without it), running our inefficient boiler much longer, and even then we’ve spent most of the time huddled in the other half’s man cave with the electric heater on. Our oil gauge isn’t accurate enough to tell for sure, but we know from calculations we’ve done in the past that running the boiler for about 3 hours a day uses up 3 roughly times as much oil as running the Rayburn for 24 hours a day, so it doesn’t take much extra heating to tip the balance. Throw in all the savings on boiling the kettle, cooking with electricity and not having to run the tumble dryer or iron (in the unlikely event that we ever have to do any ironing) and I reckon the Rayburn’s positively green, in the winter at least.

And in the summer? Well if we ever actually have one, I’ll let you know.

Well, you’ll be excited to hear I survived my first encounter with haggis on Thursday night. It wasn’t too bad, actually, if you don’t think about what’s in it or, indeed, what it’s in. I learned a few other things too:

There was probably more, but by this time there had been drink taken and if I had any other words of wisdom to share with you, I have forgotten them.

*It’s a dance. Get your mind out of the gutter. Honestly…