It was raining this morning; steady, pacing-itself rain, the drizzly kind that somehow gets you wetter than any downpour might. And I had to be in Bigtown for a meeting, or what passes for one in my current lifestyle. I did have the offer of a lift, and I could get the bus back afterwards, but I had planned to cycle if I could and it wasn’t looking promising. Come 9:30, when I had to either set off or arrange a lift, there was no let up. Getting a ride in a nice warm comfortable car was looking tempting. Very tempting.

But there was a problem. Each month this year, I have cycled less than in the month before. Ice and snow in January notwithstanding, I got out more than in the easier month of February, and short February had seen me do more miles than long March, and balmy April was shaping up no better than stormy March. There were reasons, of course, but excuses or no, nobody likes to see the graphs going in the wrong direction. Even the ride to Bigtown and back today would not stop the rot but it would slow the rate of decline and in these credit crunched times we have all learned that slowing the rate of decline is the new recovery.

And so I had to get out. But it was still raining. And, while it’s one thing to cycle in the rain if it starts while you’re out on your bike, it’s quite another to cold-bloodedly set off in the rain in the full knowledge you’ll be getting wet. So I had to resort to extreme measures.

I had to get out the waterproof trousers.

I’ve been holding out against waterproof trousers, to be honest. I know that they make sense, and that any unpleasantness due to their general rattliness and sweatiness pales into insignificance against the grimness of sitting around in soaking wet trousers but … well, they’re waterproof trousers. They’re not just unstylish, they’re the anti-style trouser. They will never come into fashion, however perverse the designers get. And if you didn’t look like an elephant from behind before, you will the minute you put them on. A smugly dry elephant, perhaps, but then smug’s not a particularly good look either.

And the bastarding things actually worked (I was secretly hoping they would be sweaty enough that it made no difference) so now I’ll have to wear them again the next time.

Does it never rain in Copenhagen?

So this was Going to Be…

…A thoughtful piece noting that we first moved up here exactly a year ago, summarising some of the lessons learned and reminding you of some of the highlights of our new life. But I’m still suffering from this wretched cold so it turned out to be a sub-par rather dull post about the fact that we moved up here a exactly a year ago. And then I read it and scrapped that and have decided instead to inform you that every time I move my head, there’s this horrible shifting sensation inside my sinuses followed by a stabbing pain and it feels as though the side of my face is going to drop off. And that you’re lucky to get a post out of me at all.

Oh and self-medicating with whisky? Turns out it’s a bad idea.

We’re off down to London for a brief visit and for once I’ve managed to persuade the other half into joining me. This means leaving the car for a couple of days at the station, if we don’t want to get a cab. But can we do this? We don’t know. We know we can pay for a day’s parking at the station easily enough but have never paid attention to what the policy is overnight. The internet tells us only that there is parking, not what it costs or how long it lasts. Well, that’s easy enough, thought the other half: we’ll just call the station the old fashioned way and ask them.

Except we can’t. There is no phone number listed for the station. There’s a central help line instead, except the central help line doesn’t have an option for finding out what the parking facilities are at a station, it’s for timetable enquiries and delays. There is an option to speak to a human – who may even know about the parking situation at Bigtown station – but none of the humans are available so we can’t find out. At the moment, the only way we can find out whether there’s overnight parking available at the station, is to drive down there and ask.

This can’t be right. I am old enough to remember when you could look up your train station in the telephone book and speak to one of the staff directly. Sometimes you’d get a grumpy one, and sometimes you’d get a helpful one, and occasionally you’d get no answer and you’d have to try again and sometimes you’d be held up waiting to buy your ticket because the guy behind the desk was on the phone trying to explain to some idiot about overnight car parking facilities. But you could usually get the answer to a reasonable question by speaking to a reasonable human being.

And I’m fairly sure that there is a phone number for the station, we’re just not allowed to know what it is. Maybe when we’ve been here a while – ten years maybe, or a couple of generations – someone will tell us what it is.

Back in a couple of days…

No not with car drivers, for once, but with an altogether more ferocious creature. There I was, cycling back from the shop, having already avoided a loose cow being lured back into its field by the farmer with a bale of hay and enjoying the return of the non-rain, when I heard a rustle in the hedgerow ahead. Too quick for me to take evasive action, I just had time to register what was going on as the animal crouched and then sprang in a flurry of black-and-white fur.

I was being pounced on. By a cat*. Fortunately for me (and it) I was in fact going faster than it had anticipated – clearly the advent of the shiny new tarmac had thrown out its calculations and foiled an ambush weeks in the planning.

Lord knows what it thought it was going to do with me if it had actually caught me – feast on my carcase for a week? Stealthe pint of milk in my bag? Take me home and use me as captive domestic staff as its own humans were no longer coming up to scratch? – but after this series of posts, I suppose it was only a matter of time.

Dogs next. And there’s one in a farm I pass through that particularly wants my guts.

* ‘You really do go slowly, don’t you?’ said the other half when I told him this

Now that I have a garden, this is not rain…

At least I hope so, because it’s pretty miserable otherwise. Certainly the potatoes seem to like it, and the broad beans, and even the leeks have emerged, although none of them – apparently – to photographable size

And tell me, somebody, that this is a parsnip seedling: 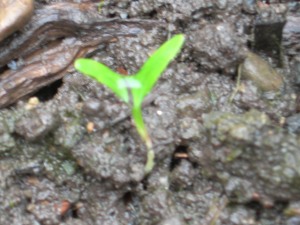 It’s that time of the year when the fields are full of lambs all busy learning what they need to know in order to grow up to be successful sheep. Which boils down to eating grass, and working out what to run away from

Lambs: Aiiiieee! Mum! Save us! There’s a scary roaring flying monster in the sky!
Ewe: don’t panic, that’s just the fighter planes. We ignore those

Lambs: Oh nooo! There’s a man, a scary man! With a black and white wolf! In our field! Run away!
Ewe: don’t worry that’s just the nice farmer and his dog. He’s the one who feeds us and looks after us and gives us haircuts. And when you’re all big and grown he’ll come and round you up and take you off to, um, university. No need to be frightened of him.

Lambs: Oh, what’s that quiet wheeled thing whizzing past us on the road? That looks interesting, let’s have a closer look
Ewe: OMG*! Tis the cyclist of doom! We flee in terror from her! Run! Run away!

Which is why I don’t have any good piccies of lambs to illustrate this post.

We had a rerun of Earth Hour – actually make that Earth day – for most of today as they were replacing our electricity pole which was apparently not tall enough, in case anybody wanted to transport some giraffes up our neighbour’s drive. This meant that after a frantic morning trying to be up and showered before the power went off, we had a rather more leisurely day trying to remember what it is we used to do before God invented the internet. The other half spent a happy morning watching the boys and their big boys’ toys (somehow the words ‘Haud on, Jimmy, we’re gonnae haftae bring in the cherry picker’ always brighten a man’s day) and the Rayburn came into its own as we could still boil a kettle and – more importantly – make toast. They offered us the old pole for firewood but we didn’t have a chainsaw and they wouldn’t let us use theirs to chop it up so we had to decline. It would have been a long hard slog cutting that down to size with my pruning saw.

I was going to try writing by hand – with a pen! – but that just seemed too much like hard work, so instead I got on with finishing this:

Literature’s loss is my laptop’s gain.

That’s the last time I’ll be attempting fair isle for a while, I tell you. Blimey that’s difficult. Next time, I’ll go for something easier. Like a chair…