The Better Part of Valour

I can’t help but feel it was a teeny bit unfair of the Weather Gods to wreak their revenge on me just as I was cycling home from a climate change demonstration – but then again, perhaps the Weather Gods are all for climate change as it gives them the chance to create even more havoc than usual. As it was, they did at least hold back on the hailstorms, freak blizzards and plagues of frogs and confined themselves to ensuring that I was thoroughly soaked from stem to stern, paying extra attention to making sure that my shoes filled up with water so that my socks had to be wrung out before being hung along with pretty much everything else I was wearing on the Rayburn.

At that point, with the rain still blattering down, and realising that I was going to have to go out in it all again to get to choir, I gave in and texted a fellow choir member for a lift. I can increasingly put up with worse and worse weather on the bike these days – but I draw the line at going out and getting soaked again when I had only just got myself into warm and dry clothes.

Today was better – dry enough to wash, re-apocalypse-proof, and dry my jacket and venture out again to help lead 24 11-year-olds through the streets of Bigtown (we walked the bikes for the horrendously hostile first 100 yards outside their school) and up to the local campus where they could cycle in relative comfort and safety while loudly disputing whether or not doing a wheely while riding down the middle of the (fortunately empty) road counted as riding single file in the strictest sense of the term. Having clarified my instructions (single file, with both wheels on the ground, and over to the left, and no, doing skids on the leaves is neither big nor clever and does not count as a controlled descent down a steep hill) we got everyone back to school in one piece and with only a few extra grey hairs on the part of the ride leaders. 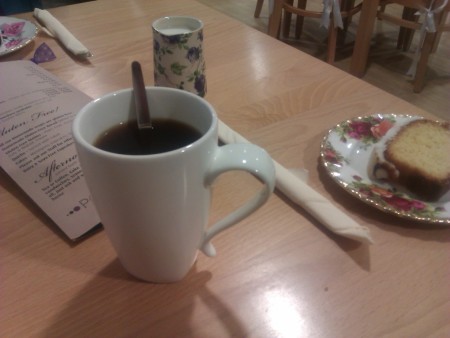 That left only one piece of unfinished business: my fifth coffeeneuring stop, this time at the Polka Dot Vintage Tea room where the coffee may not be that fancy but the china is exceedingly pretty (and no, I’ve no idea why the tearoom is described as vintage; the coffee seemed pretty fresh). A well-earned slice of cake and a good hour of gossip masquerading as discussing cycle campaign matters soon restored me for the ride home, where I was further rewarded for my efforts by the opportunity to test out the re-proofing of my jacket…

So now I’ve decided to simplify things and just have two outfits on the go: the one I’m wearing and the one drying out on by the Rayburn. All I ask is that I manage to go long enough between soakings that the last lot have dried out before I have to change again. That doesn’t seem too much to hope for, does it?

This entry was posted on Thursday, October 31st, 2013 at 9:59 pm and is filed under Cycling, Weather. You can follow any responses to this entry through the RSS 2.0 feed. You can leave a response, or trackback from your own site.

5 Responses to The Better Part of Valour