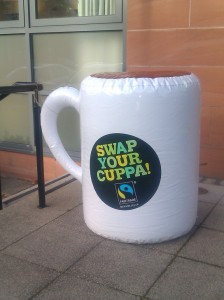 This Saturday saw not one but two coffeeneuring opportunities, allowing me to complete my challenge on a high – assuming they’re allowed because both weren’t actual permanent coffee shops but pop ups in a good cause.

The first was Nearest Village’s Big Breakfast which is in aid of the local church. We’re not church people exactly but we are ‘village’ people, as it were, and besides there was the promise of bacon so the other half was even tempted out onto the bike for the mile and a half down to the village (helped by a lovely sparkly November morning). The village hall was absolutely packed and we were glad we’d got down early as we have it on good authority that they’d run out of food before it ended at 11. We’ve learnt the hard way that you can’t hang about when it comes to village events – the concept of being ‘fashionably late’ just doesn’t compute in these parts.

Bacon, eggs, sausage, two kinds of tattie scone and tea dispatched (I steer clear of the village hall coffee as it’s generally instant), we parted ways and I cycled down to Bigtown for the Fairer World Fair, which was showcasing fair trade products, including a pop up cafe with home made cakes (from fair trade ingredients of course) and fair trade coffee. I did some early Christmas shopping which is possibly a tactical error because I’ll now collapse in a virtuous heap and not do any more until the absolute last minute. Rather disconcertingly, because the things I liked were on sale, it all worked out rather cheap as well. I’m pretty sure that’s not how fair trade is supposed to work. 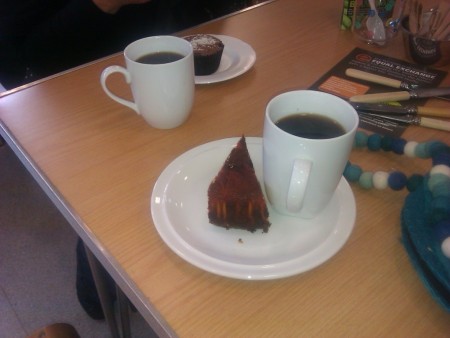 I then bought Friday’s rescuer coffee and cake while we explained to our baffled table companions why we were photographing our food. I’d feel I’d paid her back more thoroughly if the whole thing hadn’t come to the princely sum of £3…

I headed back in the last of the sunshine, having dealt my small blow against global capitalism and feeling good about humanity, a feeling which lasted until I passed the fly-tipped washing machine, bin bags and car tyres dumped in a lay by near the river. After a morning spent with people who are all in their own ways working to make the world a better place, I suppose it served as a salutary reminder that there are also people who go around making the world a worse one too. I do wonder how they live with themselves though. 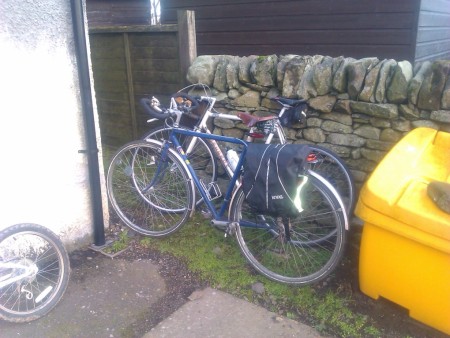 So that’s the coffeeneuring challenge over (pending final adjudication). It’s been fun – I’m not sure it’s done much to get me out on the bike any more than I would have done, but it has extended my range of local coffee shops, encouraged me to be more sociable, and sometimes tempted me off my normal beaten track, which is all to the good. Assuming my fellow coffeenaut completes her challenge today (she was cutting it a bit fine) we shall also have firmly put Bigtown on the coffeeneuring map.

Mileage: 17 miles, or not nearly enough to burn off all the extra calories…

This entry was posted on Sunday, November 10th, 2013 at 4:34 pm and is filed under Cycling, Rural Diversions. You can follow any responses to this entry through the RSS 2.0 feed. You can leave a response, or trackback from your own site.

2 Responses to Coffeeneuring: the Final Frontier