Are we Bored of the Buzzard Yet?

I know I am, but sadly the bird itself doesn’t seem to have got the message and managed one of its closest non-contact passes yet this afternoon, having cheated by swooping before I’d even arrived in its known territory (although thankfully it’s not as bad as this mad bastard  – thanks to CycleDevon for giving me a whole new set of things to be worried about, although at least I know now not to resort to any comedy headgear) 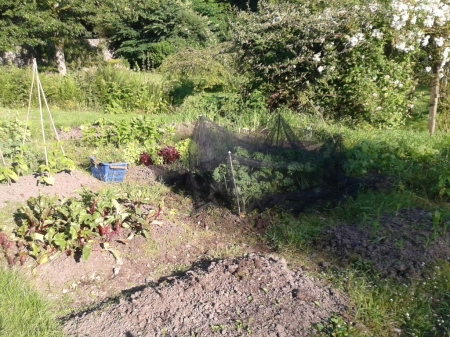 So let’s just draw a veil over its antics (at least until I manage to borrow a head cam and get some dramatic footage of it) and concentrate on the garden instead which, after a spell of me actually regularly gardening it is looking – well, with a sufficiently artful camera angle anyway – almost looks as if I know what I’m doing. 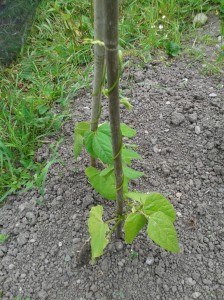 If you look to the left you can see an amazing feat of vegetable intelligence: my magic beans are not only thriving (never a given with beans), but are actually climbing up the bean poles I have provided for them. And if you’re scratching your head and wondering what’s so amazing about that, then you’ve never grown any sort of climbing plant. Every year I plant beans and peas and other climbers and watch them climb up each other, make special journeys across slug-ridden soil to climb up other plants’ beanpoles, or just cling on to weeds or even passer by’s legs – anything except use the support I have provided (my mangetout have formed a thriving but completely impenetrable tangled thicket that has somehow managed to avoid every single one of the pea sticks I put out for them and are just clinging to each other in a heap on the ground). So there’s clearly something very strange going on with these ones.

This entry was posted on Monday, July 7th, 2014 at 9:40 pm and is filed under gardening, Rural Hazards. You can follow any responses to this entry through the RSS 2.0 feed. You can leave a response, or trackback from your own site.

One Response to Are we Bored of the Buzzard Yet?