Gadding about continued today with not just an al fresco bike breakfast this morning (Breakfast ouside! I could get used to this weather) but a trip up to Glasgow to hand in a petition suggesting that the Commonwealth Games legacy would be a whole lot more legatastic if it involved some decent cycle infrastructure, if only so visiting cycling teams would have somewhere to train that wasn’t the M74 (‘it was the only stretch of road in the place that didn’t have any potholes on it’ according to one wag this morning. And probably didn’t look any more terrifying than the roads they were techincally allowed to cycle on). 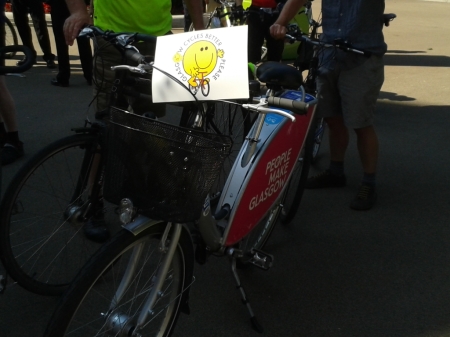 With apologies to Roger Hargreaves

Of course you can’t just hand over a petition these days, you have to make a bit of a splash. We weren’t sure how much of a splash we could manage at a week’s notice on a weekday morning in a city with a wee sporting event going on at the same time, but we didn’t do too badly.

One lap of George Square, and a very hot photo opportunity in the sun later, the politicians got given their petition, made their speeches (‘lots of big ideas in the pipeline, very difficult to reassign road space, need the political will, blah blah blah) and we were all able to disperse. Pedal on Parliament it wasn’t, but events like these probably do as much to keep chipping away at the giant wall of ‘can’t’ that seems to surround any prospect of better cycling in this country.

We keep on keeping on…

This entry was posted on Friday, July 25th, 2014 at 9:17 pm and is filed under Cycling. You can follow any responses to this entry through the RSS 2.0 feed. You can leave a response, or trackback from your own site.

One Response to Glasgow Cycles Better