Be that as it may, what did 2014 bring? (And yes, I am recycling material because I’ve nothing much new to say, why do you ask? All the papers are doing it…)

And how was your year?

*The other half’s verdict on my blog every year since I first started, almost (eek) a decade ago

The ride to the papershop did not look a particularly inviting prospect this morning. It wasn’t just the fog, or the ice on the road, but the sheer biting coldness of it all. But the paper wasn’t going to fetch itself, and besides, what is the point of having magical ice tyres if you’re going to be frightened of a bit of a chill? So, having taken the precaution of leaving a jumper warming on the Rayburn for my return, I set off.

By the time I’d got through the village I was pretty glad I’d opted for the lobster gloves because the fog and the cold were unrelenting. At least I more or less had the roads to myself. In fact, I seemed to have the whole countryside to myself.

As the road wound upwards, though, I started to climb out into the sunshine. There’s something about seeing the blue sky and the sun breaking through the last thinning veil of mist that leaves everything extra saturated and bright.

Ready to descend back into the murk once more.

I was glad of that jumper when I got home, I can tell you.

No Boxing Day ride for me (except reminiscently in the Herald bike blog) but my sister and I did stage a daring escape to the coast while the children were distracted by a DVD, so we could blow away some cobwebs of our own.*

The sea views were spectacular

This was my second visit to St. Abbs this week. The last time we were rather taken by its tiny harbour, and the way the houses were jumbled into the slopes above it, each shed with a sea view (not to mention the nice little cafe selling generously proportioned fresh local crab baguettes).

It all looked and felt a bit more … elemental in the haar and the north wind today.

* we did leave some responsible adults in charge. And a few irresponsible ones as well

It’s a glorious day, I said.

It would be criminal to waste an afternoon like this, I said.

We need to get out and enjoy the sunshine while it lasts, I said.

I had forgotten to adjust for this being Duns, home of freak weather.

In fairness to me, it did brighten up a bit later, and we were almost dry by the time we got back in.

Stick them in a cottage in the woods with NO WIFI and hence no Minecraft.

Send them out to amuse themselves in the surrounding forest

What could possibly go wrong?

For the record, we got four kids (and sixteen limbs) back all present and correct.

I’m not the only one in the family for whom sanity is bicycle shaped… For my mum, getting out on her bike, even if just for a little while two or three times a week, is a lifeline.

We managed to slip out today for half an hour before the sun set.

We didn’t get very far and even if we’d had time, the mud in the grounds of Duns Castle was a bit trying (the Paper Bicycle offroads surprisingly well but I thought the Brompton would disappear in places. It’s only little…)

And we were back in time for tea. Just as we promised we would. Sometimes the temptation must be just to keep on pedalling though…

101 Uses for a Brompton: Surviving Christmas

Let’s get this straight: I love my family dearly, even when there’s 11 of us crammed into one house for a week, I love the fact that our sibling rivalry has remained intact even though we’re all in our forties (this may not be 100% what people mean by ‘staying in touch with your inner child’ but, you know, rough with the smooth and all that), and I’m ecstatic about the fact that my immune system is about to be assaulted by the combined germs of four school-aged children from two different countries.

But, as there’s only so much sitting around in one room waiting for your turn to charge up your electronic gadget of choice that one person can do, I made sure that one thing got packed before anything else: 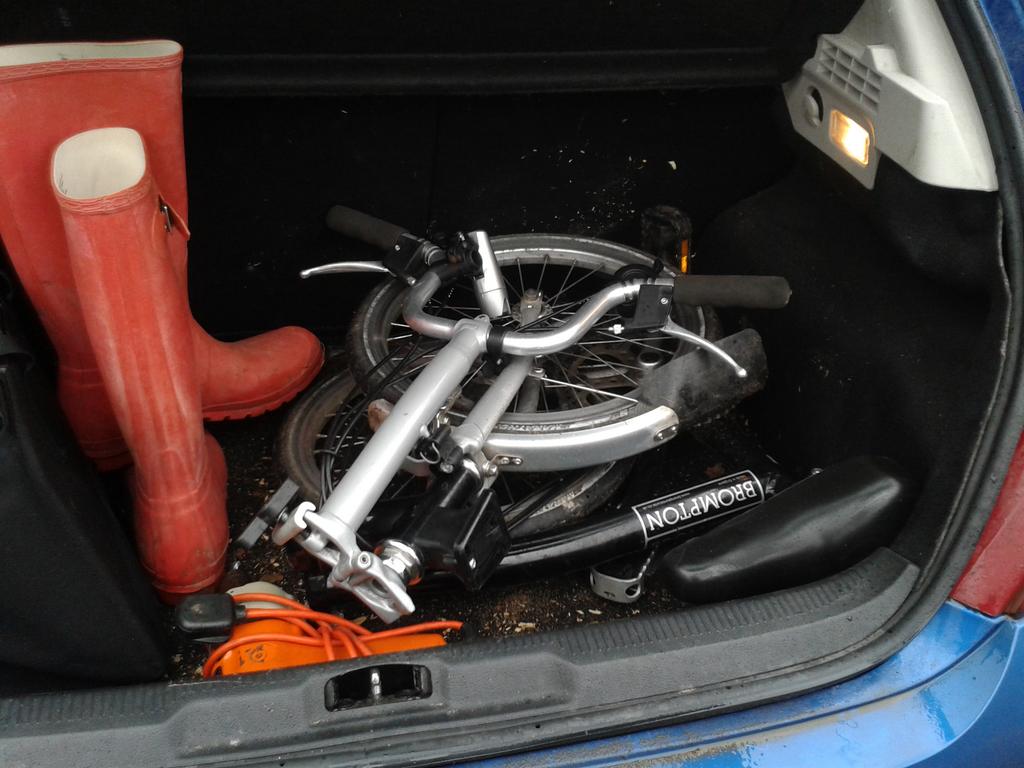 Up the Down Escalator

I can’t say I was looking forward to this morning: a couple of hours spent at the Coonsil in order to speak at the planning committee. One of the depressing things about cycle campaigning is that it turns out you don’t end up spending much time thinking up lovely new cycling routes you’d like to see and making positive suggestions about how to get them – instead you spend the bulk of your time fighting off plans that will make things worse. And even more depressing is the fact that this isn’t because of some evil sinister anti-bike lobby, but because 99% of the people involved with the council (or anything really) give absolutely no thought to the impact something might have on cycling and no clue about what is required, so it’s your job to be constantly alert to everything that’s going on and spend your evenings reading planning documents, and your mornings in meetings where people say things like ‘this would have to be considered a Section 69 matter’, just in order to prevent some piece of idiocy happening before it’s too late. Like making people dash across a 60mph road in a ‘gap in the traffic’ (in the words of the roads officer) in order to get to the hospital, to take an instance at random.

So I wasn’t in the best of moods when I got to town, despite some sparkling winter sunshine, but I had fifteen minute to kill and so I took the Brompton on a tour of the bridges of Bigtown and reminded myself that it’s not a half bad place, all things considered.

Refreshed, I went in, said my piece, fielded some not unintelligent questions from the councillors, and left feeling somewhat hopeful that a massive own goal can somehow be avoided as long as we keep up the pressure. But oh how much better it would be if we didn’t have to battle every step of the way just to keep things from getting worse…

Normally at this time of year I would be tantalising you with deep blue Colorado winter skies. This will have to do…

From the Sublime (ish) …

Vignette one: the apple-cheeked villagers gather outside one of the cottages in the main street where an elderly couple live: she would have been out singing with us if she could but he is ill and too frail to be left on his own so we have come to them and strike up, surprisingly tunefully, Once in Royal David’s City, his favourite carol. The pair of them come to the door to listen and to tell the truth it’s kind of hard to hit those high notes when you’ve got a bit of a lump in your throat, but that’s Christmas.

Vignette two: safely in the village hall, replete with mince pies and tea and more or less thawed out, the village children volunteer to sing a couple of the carols that they have learned in school. They acquit themselves remarkably well with ‘Away in a Manger’ – from memory no less – and then launch into the inevitable ‘Little Donkey’* by way of an encore, once more from memory. The first verse passes off without hitch, and they launch boldly into the chorus, which goes well. Then they start the next verse … only they have forgotten the rest of the words so they sing the first verse again. And then the chorus. And then the first verse again. Slowly it dawns on the hall that we may very well be trapped into an eternity of Little Donkey, a carol that most people feel has delighted them enough the first time they heard it, and there seems no way out until the choirmistress – with the aplomb of someone who has spent a good few years wrangling our choir into a semblance of order – calls out ‘and we’ll all join in for the last chorus!’ and the evening is salvaged.

And if we all stumbled out into the darkness later with ‘little donkey … carry Mary … on the dusty … road’ stuck irretrievably in our heads, well it’s just a sign that no good deed ever goes unpunished.

Fortunately my sister seems to have had better luck.

*awkward because when the choirmistress was taking requests earlier, the table at the back had expressly asked for ‘anything but Little Donkey’

This morning was not one of them.

I had to be in town all day and while the other half had, as he always does, kindly offered me a lift, I’ve been spending too much time stuck indoors and not enough time on the bike lately. A little bit of swearing and percussive maintenance later and the bike was shod in its magical spikes and I was away in the winter sunshine.

I’d woken this morning with a dose of the grumps, but a bike ride and a day spent happily absorbed helping out with a spot of cut paper animation restored my equilibrium. Even being sleeted on on the way home couldn’t quite dampen my mood.