It’s cooooold at the moment. I knew this cycling home from the Community Council meeting last night when it felt like my cheeks were freezing in the wind, and I knew it when we woke to ice on the inside of the windows … and I knew it this morning when I set off before the sun had properly got up to go and be photographed for the paper about icy cycle paths.*

But if I had wanted confirmation, I would have got it when it took five minutes for the teacher to defrost the door lock so we could get into our yoga class this morning. ‘What’s the opposite of hot yoga?’ someone asked. That’ll be Scottish yoga, I guess.

For those awaiting with bated breath for updates on the Yoga Wars front, Yoga Bunny has proved herself a fair weather bunny and hasn’t appeared for the last two weeks, along with almost all of the newbies. But I’m too cowardly to demur when the teacher tells me where to go, and besides, I’m getting to like my new mat neighbour. So I am practising my zen mindset and remaining in my alloted temporary slot until its owner comes back from her computer course. And then I shall strike, and the corner space will be MINE. 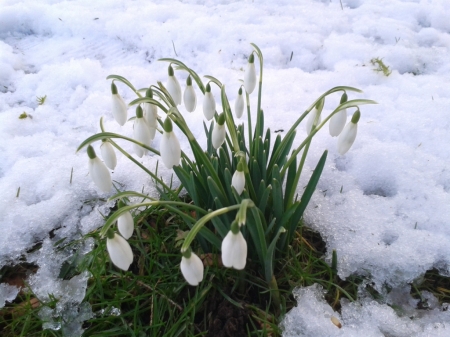 In other news, the snowdrops are out. Their timing is terrible, but I suppose they’re tougher than they look…

* for a minute when I got to the newspaper offices I thought we’d been foiled by the council actually clearing the path because the icy rutted mess that I’d originally complained about was suddenly beautifully clear. But fortunately their zeal or their salt had run out about ten yards further on so there was plenty of ice for me to be photographed on doing my Angry People in Local Newspapers face

This entry was posted on Tuesday, February 3rd, 2015 at 7:53 pm and is filed under Weather. You can follow any responses to this entry through the RSS 2.0 feed. You can leave a response, or trackback from your own site.

One Response to Frozen Out