I love a good solar eclipse. When the total eclipse was forecast in 1999 we had our plans to go down to Cornwall made about a year in advance – which would have gone better if the sun hadn’t been completely eclipsed throughout by a thick layer of cloud instead of the shadow of the moon. It was still rather a spectacular experience though. We had driven down to the coast and taken up a spot along the cliff edge, along with what looked like half the population of Cornwall. From our vantage point we could see along the coastline for miles, and all the people lining the cliffs waiting. As the moment of totality approached, everyone decided to start taking photographs, despite there being nothing to see except a rather dimmish light, and all their flashes started going off, so the whole cliff edge for miles was lit up with sparkling lights. As a majestic heavenly spectacular, it was a complete bust, but as an absurdist situationist art happening, it was amazing.

We hadn’t gone to anything like the same lengths for today’s eclipse, mainly because the forecast was for cloud so I wasn’t getting my hopes up. The sun duly disappeared behind a thick cloud at around 8:15 so I got on with some work until I noticed that the sun had made a reappearance. With the weather we’ve had, any sun at all was a bit of a miracle, and unlikely to last so I rushed out with a colander to see if I could get some sort of pinhole action projected onto our house:

That looked pretty cool, although I wasn’t entirely certain if the little crescents I was seeing represented the eclipse or just the way the light went through the holes in the colander. So I dashed inside and consulted Professor Google and made the world’s fastest pinhole camera out of the box our coffee comes in and some tinfoil. As a bonus, two people could look in it at once so we played with that for a while until the sun duly went in and we went in ourselves for a cup of coffee. By then, we had reached the height of the eclipse and it did look rather gloomy, but that may have been because it had started raining. We gave up any hope of seeing anything more and I went back to getting on with my work.

And then I looked out and found we’d got just the perfect amount of cloud cover (not a sentence I ever thought I would have cause to write):

The other half’s camera saw it better: 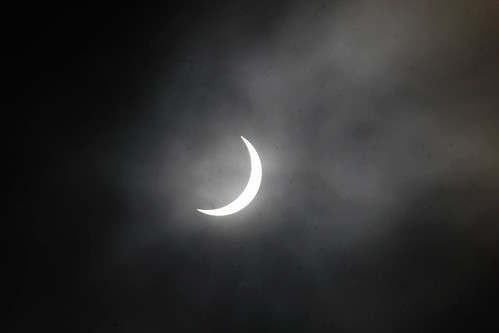 This entry was posted on Friday, March 20th, 2015 at 9:33 pm and is filed under Rural Diversions, Wildlife. You can follow any responses to this entry through the RSS 2.0 feed. You can leave a response, or trackback from your own site.