I’ve had a week of flat-out working, and no time to do anything that interesting, but this weekend we’ve been over on the east coast and we took the chance to visit a friend who is just finishing up a three month stint as a warden on the Farne Islands. The forecast was not looking great but we took the chance and drove down to Seahouses (getting stuck behind a bunch of cyclists, ironically enough). There was just time to grab some lunch and get into the holiday spirit by feeling we were being vaguely ripped off while sitting eating outdoors in the sunshine before we boarded the boat. 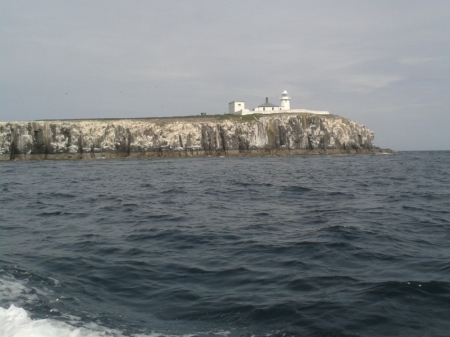 See those white cliffs? That’s not chalk, that’s bird poo, that is

There was a load of commentary about the Darlings, St. Cuthbert, seals, kittiwakes etc. but we were there for the puffins (and our friend of course) and there were puffins aplenty – flying surprisingly fast considering how ridiculously unaerodynamic they look, scuttling out of the way of the boat, and – once on land – standing around looking vaguely concerned with a beakfull of sand eels. Puffins are brilliant, they just are, especially so if you were a bookish child and long-serving member of the Puffin Club (I’ve got a special badge and everything) although apparently that cheery looking beak can deliver quite a bite if your job involves having to handle them at all. Still, it doesn’t seem to have put our friend off. ‘Seeing a puffin just makes me happy,’ she said, which must make her off the scale for job satisfaction right now. Or at least compensate for the fact that pretty much everything she owns is now covered in bird poo. It’s going to be tough to go back to a job that doesn’t involve being surrounded by puffins after that.

I was too busy chatting with my friend while helping her look out for cetaceans and generally admiring the puffins to take any proper pictures, although I think the other half managed some half-decent ones, so you will have to make do with some blurry black and white dots and take it on trust that they are, indeed, puffins. And generally fab.

All in all, a grand day out. And a welcome pick-me-up after yesterday’s doom and gloom

This entry was posted on Sunday, July 26th, 2015 at 9:03 pm and is filed under Wildlife. You can follow any responses to this entry through the RSS 2.0 feed. You can leave a response, or trackback from your own site.