Apologies for the lack of posting in recent days – I’ve been busy, but with the sort of routine boring things that don’t really generate much that is blogworthy,* even allowing for the very generous definition of ‘blogworthy’ used on this site. 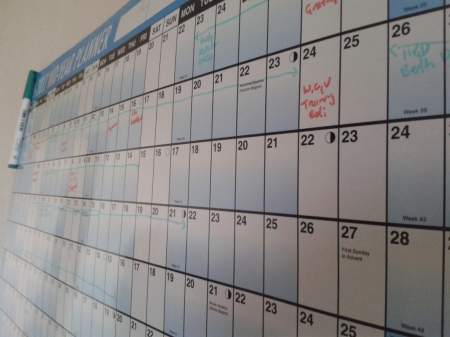 When we moved, I carefully kept aside all the things I knew I was going to have to put my hands on in short order, while packing up all the things I wouldn’t need for aaaaages – ooh at least the end of August – into various boxes. This evening, I realised that almost a month has passed since we moved and it’s beginning to wear thin as an excuse. In short, the time had come and had to rootle through the unpacked boxes looking for things like the tin that used to live on the windowsill in the old sitting room with the duplicate receipt books in it (popup bookshop) not to mention the file of random correspondence and minutes (community council meeting) and bag of useful material for handing out at bicycle promotion events (bike breakfast) – oh and the large hairy spider (actually I was trying quite hard not to put a hand on that one it scuttled out of one of the boxes). And the fact that I don’t actually yet have anywhere to put all the stuff away into now that it’s unpacked suggests that my settled intention to be a bit more organised now that I have my own study may be something of a work in progress.

However, I have finally bought myself a wall planner so I can at least see how stupidbusy I’m about to get before it happens, although it’s slightly terrifying to discover it’s already almost filled in up until mid December, and we haven’t even started planning the new Pedal on Parliament yet…

* I did consider writing a short disquisition on my new rotary dryer, taking into consideration its place in the class hierarchy vis-a-vis the washing line and the pulley rack – with a short detour into the signifiers inherent in the Belfast sink – but it would only make all of my English readers think less of me, while baffling all of the non Brits** who had no idea there could be a class-based component to laundry accessories.

** Any Scottish, Welsh and Northern Irish readers would just roll their eyes.

This entry was posted on Friday, August 26th, 2016 at 9:43 pm and is filed under moving. You can follow any responses to this entry through the RSS 2.0 feed. You can leave a response, or trackback from your own site.

5 Responses to It’s About Time