Five Things I have Learned about Sourdough

So, I promised you an update on my sourdough baking adventures, and who am I to disappoint, especially now that all the picturesque snow has melted (it’s amazing what a day of rain will achieve) and been replaced by a slightly worrying new burn running half way round the house, which we’re hoping will disappear again when the currently saturated ground dries out some time in ooh, May …

1. there are more ways to bake sourdough bread than you ever dreamt of. And every single one of them is _the_ way

If you start googling for sourdough recipes you pretty much soon find that everyone who’s ever baked sourdough bread has then gone and started a blog about it (a bit like cycling, then), laying down their absolutely failsafe method for making sourdough bread, which is of course slightly different from everyone else’s. I’ve yet to discover whether the sourdough bread world is as riven with factions and controversies as cycling is – or what the sourdough equivalent of vehicular cycling or helmet wearing might be – but I’m hoping that all that soothing carbohydrate and delicious bread products is keeping them mellow because I don’t want to stumble into some horrible twitterspat over dutch ovens or kneading vs no-knead techniques.

I originally got the impression that the hardest thing about sourdough starter is keeping it alive. But it turns out Jimmy (Carter, the starter) is pretty vigorous for an old guy, and has already escaped from his container into the fridge at least once. The way the starter works, you keep making more of it too, and because the dough is sticky it gets everywhere (I keep looking down and realising that the respectable not-gardened-in trousers I thought I was wearing are now spattered with sourdough). Given that it’s all alive, I am starting to wonder if it’s basically taking over the house and possibly even the septic tank, and you really don’t want that rising up in the middle of the night. Some people have suggested composting any leftovers but I don’t want our army of compost daleks becoming sentient …

3. You cannae change the laws of physics

But what about the bread, you cry? Well the first loaf I baked followed a recipe that claimed it didn’t need to be proved in a basket, but would rise unsupported. Ha. Hahahaha. The result was a fine looking and very tasty discus, because sourdough bread dough takes forever to prove and even though it is rising while that happens, it is also spreading slooowly because it’s quite wet compared to normal bread dough.

4. I’m a much shallower person than even I imagined

As a result of the whole laws-of-physics thing, I went back to basics for my next two loaves and (following the Bread Matters recipe) used a loaf tin to create a more loaf-shaped loaf. This worked – it was delicious, it made reasonable sized slices for making sandwiches and toasting, it could be sliced without bending the bread knife, but it looked a bit …

Not so much rustic, as pretty urban, as if it had lost a fight in a dark alley (it was a bit of a struggle getting it out of the tin). What can I say? My instagram feed is full of gorgeous pictures of beautifully risen and marked loaves nestling in baskets lined with checked cloth, while mine got dubbed a brick and ‘dwarf bread’ by Twitter which, if you read your Terry Pratchett, is not a compliment.

So, following a recipe from another Twitter user, I sorted out an improvised proving basket from a serving dish and a tea towel (after 26 years of marriage it’s quite something to be able to finally use one of your wedding gifts). 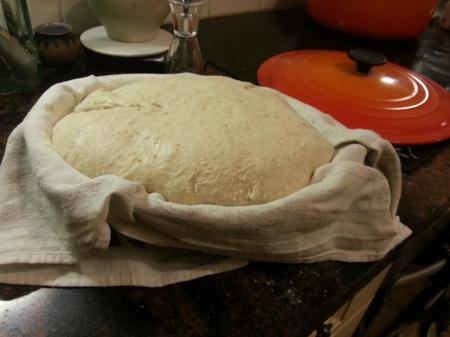 I gave it a nice long time to rise, failed to make any pretty patterns in the top, bunged it in a dutch oven, only burned myself a little bit trying to get the lid off half way through and bingo

I am ready for my closeup

So now the only problem is that I’ve got to keep it up because I don’t think we can go back to normal bread. My ambition now is to see just how long we can keep going without resorting to the back-up loaf of shop-bought bread that’s been sitting in the freezer since the beginning of the year. So far, I’ve been keeping up with demand (which appears to have doubled since I started this project) but given it’s a 24 hour lead time minimum, it takes a bit of planning

In fact, I now have to go and set off another Amy (which is what I’m calling the production sourdough, i.e. the offshoot you make the bread out of, rather than Jimmy the ancestral starter that lives in the fridge – this all makes perfect sense in my head) and maybe pick another recipe to see if I can hit my next goal: a loaf that actually remains oval rather than mysteriously going round while it’s in the oven. Oh, and mastering those pretty patterns on the top

What recipe do you use?

This entry was posted on Wednesday, January 24th, 2018 at 9:34 pm and is filed under Rural Diversions. You can follow any responses to this entry through the RSS 2.0 feed. You can leave a response, or trackback from your own site.

10 Responses to Five Things I have Learned about Sourdough