Potato Day: You can Run but you can’t Hide

We weren’t going to go to Potato day this year as I was supposed to be in Glasgow that weekend and anyway, my veg plot is in a state of dilapidation: having made the decision to switch to raised beds, I haven’t actually done anything about it, except to pile up some manure and compost where the veg beds are likely to be and spend a lot of time looking at raised bed options on the Internet.

This all seemed reasonable when the garden was under several inches of snow, but the snow has melted and there are unmistakable signs of spring everywhere, not the least of which was it being, help, March already. And then we learned that Potato Day had been postponed by the snow like everything else to today and it sort of all came together: we had the time, and my parents were planning on going, and perhaps picking up a few seed potatoes would be the best way to gee me into action in the garden. So the decision was made: a quick dash over to Kelso for a few seed potatoes, lunch with my parents, and back in time for tea. 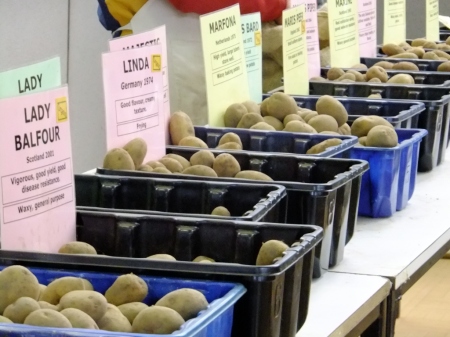 The doors were due to open at noon – an hour later than the normal time of 11am, a fact which had apparently had to be broadcast on Borders radio to prevent a gardening related riot when the military wing* of the gardening classes of southern Scotland arrived at the Borders Showground at 11 sharp and were denied entry. We arrived at about 11:45 – just as my parents did the same – to discover that the fleece-clad stormtroops had already forced the doors or otherwise gained entry, and Potato Day was in full swing, ready or not. The other half – an old hand by now – quickly bailed out from the serious potato scrum side of the event and went to check out the shortbread emporium side of the operation, which is generally more civilised. I headed straight for the hot tickets (Charlotte, Shetland Dark, Rocket) added in a wild card (Saxon), and got out while the going was good. My parents, also old hands by now, did the same and – after being briefly detained at the stall of the mad jam woman (I’m not being rude, that’s what she calls herself although she seemed fairly sane to us – that said, we haven’t actually tasted the chilli relish that she described as being ‘medium hot’ yet so time will tell (we declined to go for the rather more threatening sounding Arson Fire)) – we escaped just as all the people who had actually listened to the announcement on the radio and showed up for noon as they were told were queuing up at the door.

Once outside, having extracted our car and helped extract various others from the quagmire that the parking had become (possibly the fact that Potato Day was organised by BOG should have tipped us off…) we headed for lunch at a nearby garden centre, reasoning that it might be a bit quieter (TOP TIP: do not attempt to have a quiet lunch at a garden centre on Mothering Sunday), and then just thought we’d have a little look at the vegetable seeds on display on the way out, bearing in mind the state of the veg plot, etc. etc., no harm in browsing after all. And so now I have a full vegetable plot’s worth of seed to plant, not to mention three beds’ worth of seed potatoes, and it looks like I’d better get on with those raised beds after all …

* regular readers will be aware that potato day, far from being a gentle celebration of the humble tuber in all its variety, is a hotly contested competitive event and not for the faint hearted.

This entry was posted on Sunday, March 11th, 2018 at 9:19 pm and is filed under gardening, Rural Diversions. You can follow any responses to this entry through the RSS 2.0 feed. You can leave a response, or trackback from your own site.

4 Responses to Potato Day: You can Run but you can’t Hide