Setting off unforgivably late this morning, having already been delayed by a soft back tyre, a talkative neighbour and my unfailing need to act out a demonstration of ‘more haste, less speed’ whenever under pressure to do something to the bike quickly,* I worked out I could still be on time if I stepped it up a gear. As long as I didn’t encounter too many tractors attempting to squeeze past each other on a narrow section of road (just the one pair) and any wayward sheep I would be …

… which was when I saw the sheep caught up in barbed wire. For it is February, which means we’re getting into prime sheep escapology-and-attempted-suicide season (it runs from approximately the beginning of February until the 31st of January, as far as I can tell, but it peaks as spring approaches), and someone on the pipeline project had left a stretch of loose fencing, including barbed wire, just hanging about where they’d cut the fence to put a gate in. Obviously, this wasn’t in a field with actual sheep in it, but it was next to one, and that meant that at least one sheep had got out and was now tangled up in the loose wire and pinging around like a panicked woolly pinball trying to get itself free.

Late though I was, this didn’t look like it would end well for the sheep and, this being the countryside, there was nobody about who looked like they’d be any better at fence de-sheeping than me. So I stopped, approached the gate, and stood with my bike plotting how I might manage to grab hold of and subdue what was quite a large and by now quite panicky sheep, remove the barbed wire, and get it back in its field without doing any damage to myself or the sheep.

Fortunately, at that point the sheep spotted the scariest thing in the known world – my bike – ripped itself free from the wire, and then – in an act of genius unparalleled in the sheep world – got itself back into its field through the same hole in the fence from whence (from the evidence of the wool left all around it) it had escaped.

I live in fear that one day the bike won’t work its magic and I’m actually going to have to free a sheep from something, but so far it’s been 100% effective at injecting some sense of self-preservation into their little woolly heads. Long may it last. 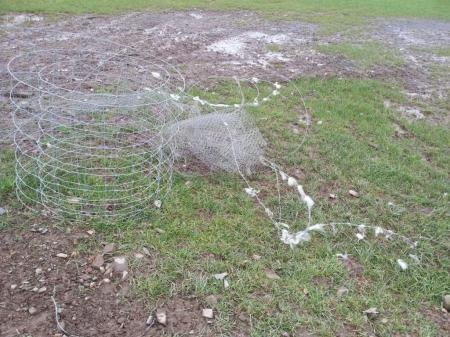 Oh, and I time-trialled it the rest of the way into Bigtown and was a scant three minutes late.

This entry was posted on Tuesday, February 19th, 2019 at 10:39 pm and is filed under Rural Diversions, Rural Hazards. You can follow any responses to this entry through the RSS 2.0 feed. You can leave a response, or trackback from your own site.