I’m in danger of becoming one of those bloggers who post at increasingly infrequent intervals, mainly with a litany of excuses for not having blogged more frequently, yet somehow here it is a week since I last posted and unless you want photos of compost* and some not-very-thrilling garden updates (the asparagus is looking a little more chipper, the beetroot is coming through, we’re still on a three-line lettuce-eating whip) there’s not much to say at the moment or at least I’m not feeling all that inspired to say it.

Life should get a little more exciting in coming days as I’m about to embark on a couple of weeks of unaccustomed sociability: the Cycling Embassy AGM in Cardiff, an old school friend visiting, another all-ability cycling day of chaos in Bigtown and then a dash up to Fife to visit more old school friends from a different school. All of which would be much more enticing if the major editing job which was supposed to be finishing this week hadn’t been extended for the next fortnight – hello freelancing life and the freedom to work to your own schedule as long as that schedule involves spending half your supposed holiday time hunched over a laptop. 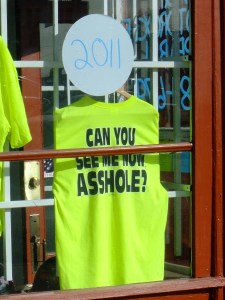 Some things haven’t changed since 2011

In preparing to write this, I did dig out this ancient history from 2011, just at the start of the Cycling Embassy – the first cycle campaign I ever started. Scrolling through the comments reminds me of how far we’ve come – there are few cycle campaigns in the UK now that don’t recognise the importance of proper cycling infrastructure – and also how far we have to go – some cities are cracking on with building a cycle network but even the best are making painfully slow progress, while other places are doing nothing. It seems everywhere in the UK, from the government downwards, is happy to declare a ‘climate emergency’ but whether that will translate into accelerating progress over the next few years is anyone’s guess.

That said, Wales has been quietly getting on with things (implementing the 20mph limits Scotland was too feeble to support, cancelling a motorway, drawing up decent design guidance for cycling infrastructure instead of kicking it into the long grass) so the Brompton and I will be curious to see what cycling in Cardiff will be like. Assuming I get to unchain myself from the laptop for long enough to find out …

* Don’t worry if you do, you will still get them, but all in good time.

This entry was posted on Wednesday, July 17th, 2019 at 12:17 pm and is filed under Cycling. You can follow any responses to this entry through the RSS 2.0 feed. You can leave a response, or trackback from your own site.