Who Let the Dogs Out

Since we’ve been living up here, we’ve been entrusted with the odd bit of animal sitting, mainly chickens, which comes with its own rewards. This week, however, our animal sitting activities have been taken up a level.

Our neighbours up the road have gone off for a week leaving us in charge of three pigs, several sheep, a dozen hens, some pheasant chicks, three guinea fowl, two dogs and four extremely aggressive geese (the whole operation isn’t so much a smallholding as a novelty Christmas song). Fortunately, this mainly just involves checking that the various animals are still where they’re supposed to be and have water, chucking food at some of them, and shutting the door on the geese (hurriedly) at night and letting them out again in the morning.

The hens are still young uns so aren’t laying, but the guinea fowl are more than making up the deficiency (I have to confess, I had no idea that you could keep them for eggs as well as for just having fantastic polka dot feathers and making a racket; apparently they also eat ticks and don’t make as much of a mess of your garden as chickens do).

And it’s also been a chance to enjoy all the good bits of having a dog – going for walks, appreciating the aerodynamic qualities of a good stick, finding that specific spot behind the ear where it’s the most satisfying to be scratched – and none of the rubbish bits (mainly, picking up poo and paying vet bills). Even if the younger one (apparently a Labrador-kangaroo cross) has spent the week practising leaping until she managed to get out of the yard unaided today – and the weather has occasionally been a little suboptimal for walkies … 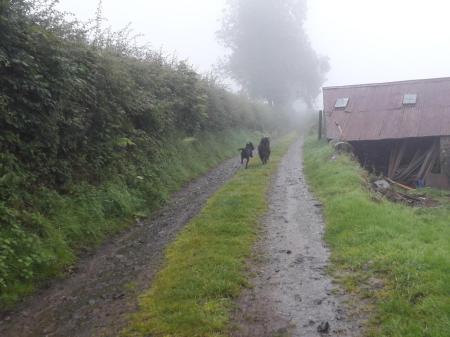 People often ask us if we’re ever going to get some pets of our own. I do occasionally consider it but on the whole I think that the best kind of animals are the ones you can give back to their owners when they become tiresome (see also: children). Certainly, I’m no closer to wanting a dog, or a smallholding, of my own after this week … although I may have to stop googling ‘raising guinea fowl’ before things get out of hand.

This entry was posted on Saturday, August 1st, 2020 at 7:48 pm and is filed under Rural Diversions, Rural Life. You can follow any responses to this entry through the RSS 2.0 feed. You can leave a response, or trackback from your own site.

3 Responses to Who Let the Dogs Out