It’s fair to say, we’ve not gone short of a calorie or two (thousand) on this visit to the US. Most of them have been entirely delicious* and I don’t (currently) regret any of them for an instant but, having done a fair bit of driving and sitting in the last few days, there haven’t been too many opportunities to compensate for all the eating. Today was our last full day, and the forecast was to be fine, so we took the chance burn off some of the surplus if we could, starting with a bike ride with a view of wild turkeys (I’m stupidly excited about wild turkeys although apparently they’re quite common in these parts)… 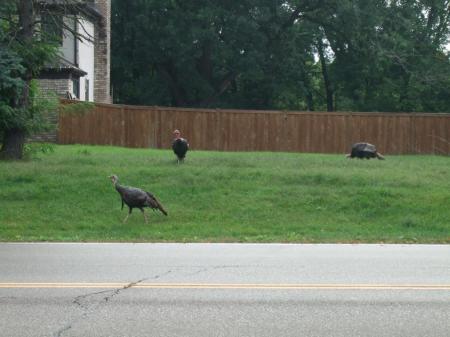 And a last chance to enjoy one of the many thousands of lakes. 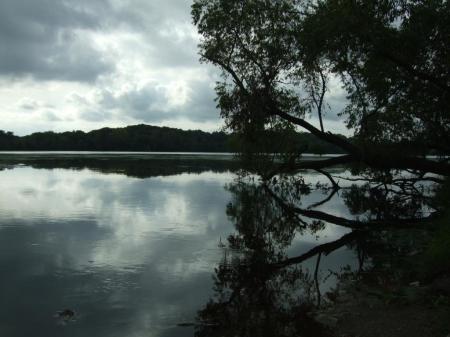 And has a converted grain elevator, which is actually pretty cool

Most importantly, and not to be outdone by Iowa, it has an impressive bridge, and although this one is mostly for cars, they let people use it too. 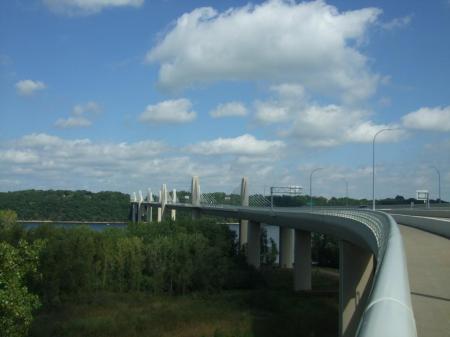 As you can undoubtedly see, it’s an “extradosed” bridge – a hybrid of a cable-stayed and segmental box bridge structure.**

Obviously we had to give it a go, especially when we realised we were effectively walking to Wisconsin (I think this is probably the first time I’ve ever crossed a state line on foot although I have walked across an international border that’s getting more contentious by the minute while the other half has walked across an ex-international border that now no longer exists, back in the days when it was the other side putting walls up, not us).

All told it was about a mile there and a mile back – quite long enough to walk on a hot afternoon, although there will soon be a nice circular bike trail once the historic lift bridge is back in action. Just enough to burn off a healthy lunch, with calories to spare to cycle down to the local farmers’ market in Shoreview and buy some more food and rack them all up again and then some.

Back to Blighty tomorrow, if we are spared, with, undoubtedly, enough fat reserves to survive the most disastrous of Brexits.

* And can I just say that of all the delicious calories we’ve had on this trip, the sweetcorn (50c per cob at the farmers’ market) has probably been the chief revelation. If you’ve been buying sad little shorn cobs wrapped in clingfilm in British supermarkets you have no idea what you’re missing.

** according to the helpful information sign along the way

Stick in the Mud

The other half had important things to do that involved spending the morning in a darkened basement and so I, conscious that I’ll be heading home soon, decided to go for a little bike ride and birdwatching expedition on my own. I wasn’t intending to go far – just to the point where the path is flooded out – but as I was pottering along trying to identify which of the seventeen-hundred subtly different American sparrows I might be looking at, I was passed by a woman on a whizzy looking mountain bike (and as an aside, I find the American habit of shouting ‘on your left’ as they cycle up behind you extremely disconcerting. I can’t help interpreting it as an order, rather than a warning, with unintended consequences. What’s wrong with just having a bell or failing that saying hello?). Shortly afterwards, the sparrow still unidentified, I saw her coming back the other way.

‘Cycle path still closed then?’ I asked her.

‘Oh no, you can get through, it’s just a bit muddy,’ she said cheerily.

Now, I don’t know if she meant ‘you can get through if you scramble up a bank and get onto the road’ or whether Americans have got better at their deadpan humour and she was having me on, but I can report that the cycle path is still closed, as in ‘has a river running over it’ closed, and also that if you cycle through thick enough mud towards the bit where the river is running over it like a complete idiot because you’ve believed someone that the path is not closed, then your bike will come to a standstill with its wheels completely jammed solid and you will have to carry it back across several yards of mud and then scrape it down with a stick before you can so much as turn a pedal

I suppose it should have occurred to me that if it was just a bit muddy then she wouldn’t have turned back on her fancy mountain bike, but she did look quite nicely turned out and I thought maybe she didn’t want to get her lycra all clarted up with mud. Although what then is the point of having a fancy mountain bike, I wasn’t entirely sure…

Nothing daunted, we headed out again this afternoon and did the scrambling up a bank thing, and then attempted to get back onto the river path on the other side of town. After a bit of hunting about for the way down – obviously the only bridge which has bike lanes on it only has steps down to the river – we encountered this path which seemed to lead down quite nicely. OK, so it had a barrier across it, but we’re used to cycling in the UK where the National Cycling Network is full of barriers apparently designed to stop you cycling on it, so we dodged round that and realised that perhaps the barrier was there because when we turned the corner the path ended like this:

No wonder Americans like their mountain bikes so much: they’re the only way on and off the cycle path… Or, you know, you could load your bikes onto the back of your pickup truck like normal people.

However. There’s no such thing as a bad bike ride… and after riding out to the Nature Center and doing a bit of birdwatching and being disappointed in a park where the cafe does not serve cake or even donuts, and diverting around another bit of flooding (where some teenagers were happily ‘fishing’ enormous carp out of what was effectively a puddle, and a rapidly drying puddle at that) and tackling another scary road (the other half’s idea of subjective safety is different from mine) we finally managed to make it to Nick’s Dairy Creme, which must surely be a contender for the most American thing ever:

And I had a hot fudge brownie sundae. With extra nuts. Because cycling may be its own reward but sometimes you need a little bonus 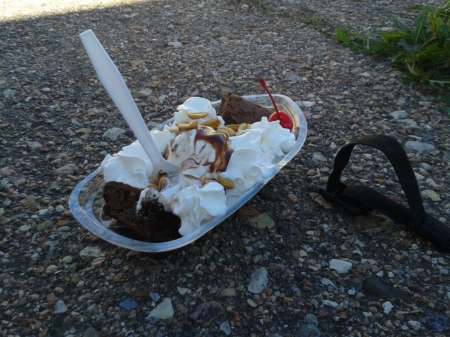 And no, I couldn’t eat it all…

You know, going on a long bike ride in the attempt to burn off our breakfast pancakes – complete with butter and maple syrup, naturally – would probably have worked better if we hadn’t then stopped off for lunch at the sort of deli where you have to dislocate your jaw to get the sandwich into your mouth (Americans must regard eating out in the UK as one long succession of disappointments at the midget portions…). Particularly when the waitress was so impressed by us arriving by bike (we had got a little lost and the place was situated on a road that the local bike map classified as a double black diamond run) that she not only gave the other half an extra packet of crisps after he inhaled his first one, but she gave us two free cookies on the way out. ‘After all, you’ve ridden all that way, you hardly need to worry about the calories…’

If this blog post makes no sense it was because I was woken this morning at 1:15 by the other half wondering if it was time for coffee yet. As it happens, it was, but it was time for coffee in Scotland and we were in Colorado having travelled for the last 18 hours by train, disintegrating Picadilly line (signal failure in the Hatton Cross area), emergency detour to Ealing Broadway, Heathrow connect, 767, airport shuttle, scarily small commuter plane and car. As ever, the air travel part of the trip reinforced my suspicion that all airports are designed by Greenpeace to put people off flying for life – although we did manage to find the one corner of Chicago O’Hare airport where CNN isn’t coming at you from three directions – but the only really traumatic part was getting to Heathrow in the first place. Our cunning plan of booking a flight that left at the civilised hour of noon turned out on closer inspection to involve crossing Central London at the height of the rush hour with our enormous main suitcase, smaller emergency backup suitcase and, for maximum commuter annoyance, two backpacks. Turns out that there are some Londoners who, when encountering two yokel types (I was accused of dressing like a farmer by one of my ex-colleagues on Tuesday) and their assorted baggage attempting to squeeze onto the Picadilly line at 8:15 am, are actually pleasant and helpful about it rather than doing what I would have done and formed a human wall to prevent them getting onto the train at all. Who knew?

Anyway we have arrived, and our suitcase too, which is more than it did last time. The sun is shining, the weather is forecast to be about 15°C (59°F), there are rumours that there might be some bikes lurking somewhere and I’ve got myself a connection to the internet. What more could I possibly require?

Well, a copy of the Guardian would be nice, but that would be a hell of a cycle ride…