It was Cutting it Fine …

… but May finally came good.

The may is even out, at last. Let the clout casting commence.

We can depend on very little when it comes to the weather around here, but having one precious week of fine warm weather towards the end of May had started to feel like something we could count on. It’s a few days late but it does appear to be here, squeezing into May by the skin of its teeth.

Naturally, I shall be spending it mostly chained to the laptop, but at least I’ve got the daily paper run to enjoy it in.

I had for some reason thought that things might get a bit calmer after PoP – a chance to chill out, catch up with some gardening, possibly even tidy the house (but let’s not go mad, eh?). Naturally that didn’t happen and this last week has been particularly bonkers as I’ve tried to combine a rash of tight deadlines, commitments I’d taken on in the intoxicating day and a half when I thought I might be about to have some spare time, and coordinating a non-Pop demo (of which more anon) which suddenly kicked up into high gear just as the sun came out and the countryside hit peak May in all its blink-and-you’ll-miss-it loveliness.

So today was a bonus: one of the commitments I’d taken on was to lead a chilled ride out to lunch for a local cycling event and although the forecast was for it to be at best cloudy, the weather outdid itself. 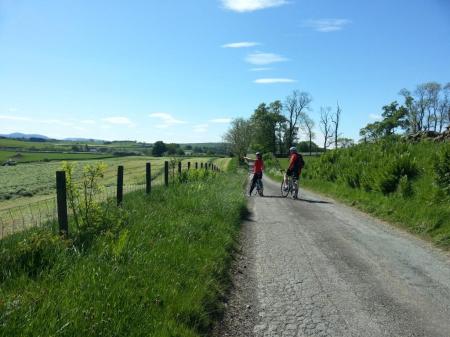 I was leading a select bunch of nice people who were happy to ride at the speed of chat, and I was suddenly reminded just what an amazing place we happen to live in (especially at this time of year).

And we barely saw a car.

I still have a million things to do and I have no doubt that the few hours it took out of my day could have been more productively spent but I don’t regret it for an instant.

And now, back to the grindstone…

I think my weather app must be broken … pic.twitter.com/dbMAtNcWh4

Not only has the fine weather continued, but suddenly it’s gone from ‘nice and sunny and warm if you’re out of the breeze’ to ‘this is not a drill, this is summer, enjoy it while it lasts, because when it’s gone, its gone’

Unfortunately this has coincided with the crunchiest of crunchy work deadlines so I’ve mainly been enjoying it by proxy, but I have been allowing myself a snatched hour or so outside here or there. This has meant choosing between gardening and the bike …

Today the bike won, even though my seedlings are queuing up to be planted and starting to suffer in the sun. I don’t regret it though, because the may is out (and the bluebells and the gorse and everything else) and where the farmers haven’t been slurry spreading the air is positively perfumed and gorgeous, and warm with it. 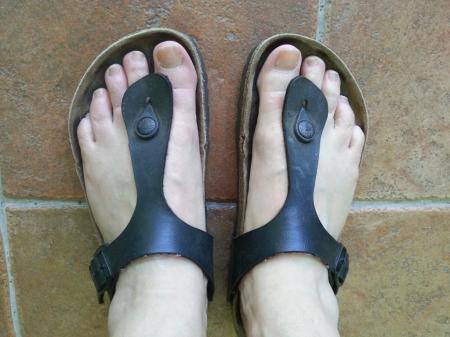 Apologies for the glare…

There might even have been a bit of clout casting done.

Besides, I have pipeline news: they have finished laying and joining the big gas pipe and started to make good the enormous hole they dug to do so, so the site now looks like this. Given the talent the land round here has for growing grass, I expect it to be indistinguishable from the surrounding fields within weeks.

Or almost, because a mysterious pipe remains, sticking out of the ground, purpose only to be guessed at … 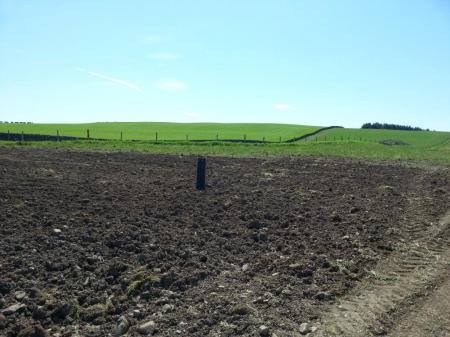 Amazingly, if the forecast is correct, this weather is set to continue after the deadline crunch has passed and I will be able to do all the binge gardening I’ve been longing to do all week. Watch this space. I might even get around to blogging about compost …

I genuinely did not have time to get out on my bike today – and I didn’t need to go and fetch the paper because the other half was going into town.

But it is May and the fine weather is still here, and each day brings another fleeting spring moment, and when it’s gone it’s gone. Today it’s the turn of the cow parsley, just beginning to froth in the hedgerow. We have slogged our way through the winter, living for the moment when this weather would arrive, and it would be criminal not to slip out just for an hour or so to enjoy it.

And the roads were empty, for some reason, even emptier than they normally are. Could it be that people round here were all huddled inside, watching the royal wedding? I encountered about three cars and perhaps half a dozen cyclists, one of them out stretching his legs before the cup final.

Tomorrow we have lunch guests (the greenhouse inspection committee) and we’re hoping this weather will continue long enough to wheel out the barbecue. At least we were, until the local farmer – also keen to seize the day – made the most of the fine weather by spending the afternoon spreading slurry. Hopefully the smell will have dissipated somewhat by then

Got to take the rough with the smooth, living the rural life. This is the price we pay for having hot and cold running hares in the garden, and coos for neighbours.

After a fortnight on a borrowed bike, getting back to my own was almost as good as getting back to my own bed (in fact better, as it was so bloody freezing when I got into bed last night I found myself shivering uncontrollably even with a hot water bottle. Whose idiotic idea was it to turn off the Rayburn on the flimsy grounds that it would be June when we got back from the States?*). It felt a little skittery for the first few hundred yards – although whether that was the effect of switching from a weighty hybrid with knobbly tyres, or just general high spirits on the bike’s part after two weeks in a shed, I don’t know. 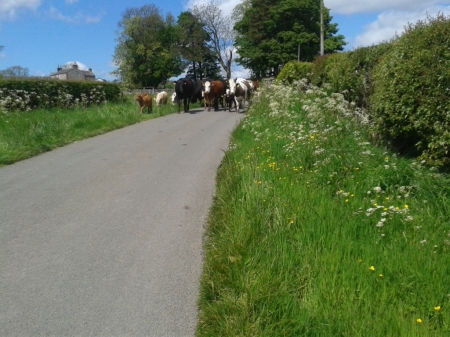 It was good to be back on the old papershop run too, even though the traffic was terrible (I adopted the correct procedure for allowing cows to pass me and with a bit of eye rolling they made it past), and ASBO buzzard did a few warning traverses as I crossed into its territory, although without actually attacking.

Bluebells. Obviously they were about five times as lovely as they look here, but you’ll just have to imagine it 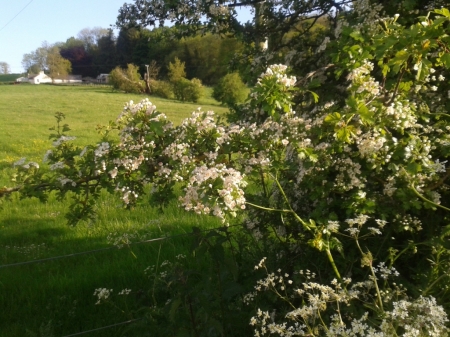 The may is out although it’s still a bit nippy for any over-enthusiastic clout casting.

And when I was riding home from Bigtown this evening I had to keep stopping to take photos because it was just so lovely. 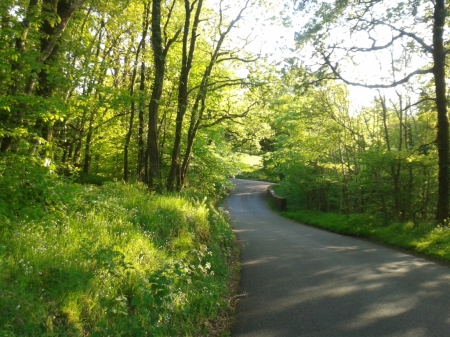 Oh all right, the fierce headwind might have had something to do with it as well…

Rather less lovely was the horrifically road-killed deer that’s festering half way down the road to the village. I did take a picture, but it’s too grim to post. Normally any deer get scooped up for venison pretty quick but this was clearly too mangled. Drivers, please slow down on rural roads, even if you don’t care about me you surely don’t want to hit Bambi…

The downside of the mild winter we’ve just had is that the slugs have been even more rambunctious than usual, which means it’s been long past time to get going with the anti-slug measures.

Controlling slugs is simple. Everyone has their favourite method, from eggshells or coffee grounds to copper tape, beer traps and pellets so the way to go is to ask everyone’s advice and then do ALL of it. At once. At least round here, anyway. As well as all the other measures, I’ve actually always had pretty good success with my jars full of slug beer – if you measure success in terms of the number of slugs caught, anyway – but I do have a tendency to get neglectful with keeping the traps going. The problem is that brewing the slug beer is a bit of a pain, and every time you empty the traps you have to mix up a new batch. And if you leave the traps full of slugs for longer than a few days then the resulting macerated fermenting mess of festering mollusc remains is a bit, well, exactly as you’d imagine a macerated fermenting mess of festering mollusc remains to be. So emptying and refilling the traps slips to the bottom of the list and my plants get munched.

Fortunately, technology marches on and, perusing the latest edition of the Organic Gardening Catalogue, I discovered that our nation’s finest minds were onto the problem with extra fancy slug traps complete with slug baskets to enable the slugs to be removed and fed to the chickens without having to refill the bait. However, call me cheap but I need about eight or ten traps around the garden and I was buggered if I was going to pay £13.95 for some bits of plastic when up to now a collection of old salsa jars had done the trick. So it was time to rummage around in the shed for supplies and do some inventing: 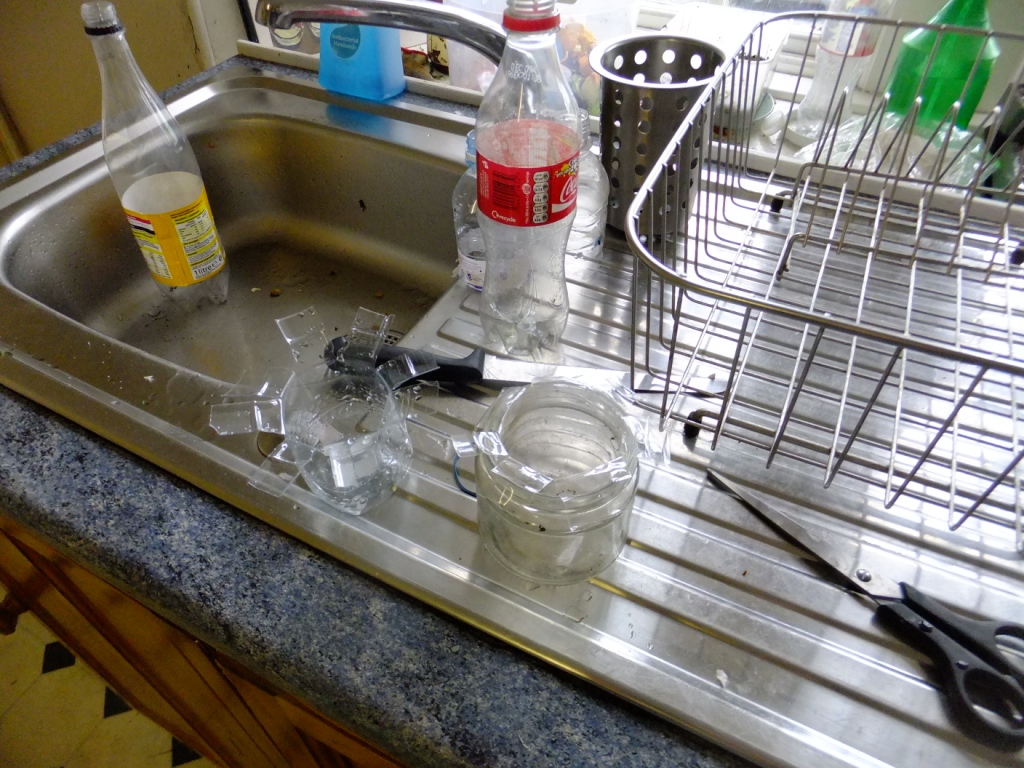 (aren’t you patenting this? the other half asked as I took this photo.)

A couple of sawn-up plastic bottles, with holes drilled in the bottom by the other half using his power tools, completed my slug baskets. However, they weren’t entirely satisfactory because, for some reason, the manufacturers of plastic bottles haven’t thought to make them exactly the right diameter to fit snugly inside the jar of our preferred brand of salsa (I know, what were they thinking?). So I cut some flaps to try and guide the slugs up and over into the basket. The other half thought they might actually keep the slugs out, so in order to test this theory I have put out four traps, two with baskets and two without, and put them around my newly planted out baby lettuces to see which was the most effective. 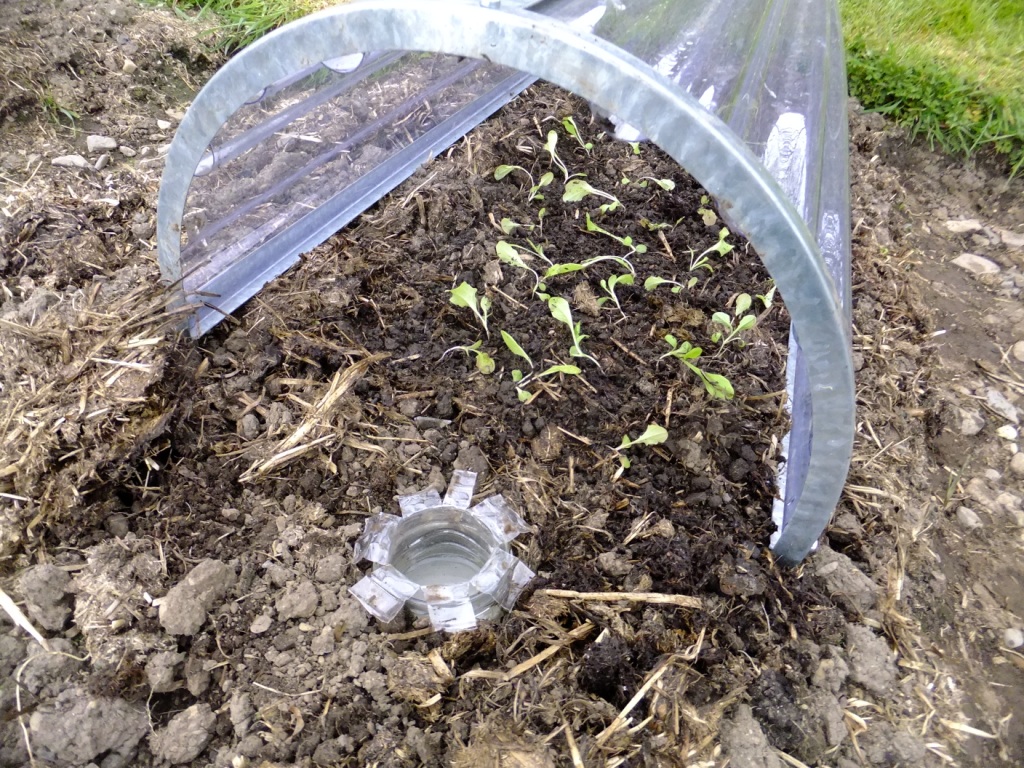 What could possibly go wrong?

Well, it turns out that instead of spending my afternoon inventing, what I should have been doing was checking the weather forecast and then earthing up my potatoes because, May or no May, last night we had a pretty sharp frost and the little green shoots which had just appeared got a bit nipped.

Still the frost has, at least, kept the slugs out of action for a bit…

Get Yer Clouts Off

And it’s actually warm too. But I’ll be keeping the thermals handy all the same … just in case.