I’ve been a bad bike blogger recently. It’s not that I’ve not been cycling, it’s just that all the cycling I’ve done has been pretty routine – to the papershop and back so often I’m in danger of wearing a groove in the road. I still enjoy the ride but it’s pretty uneventful – in fact, that’s generally why I enjoy it – so it doesn’t exactly make for blog fodder. And even I was getting a bit bored by doing the same route over and over. So with the spring here, or hereish, and the weather forecast not too bad, I decided to venture further afield.

I even had what I hoped was a blogworthy destination in mind. According to a comment on Real Cycling, the second dullest OS square in Britain could be within cycling reach of me. It was a bit of a stretch, but how hard could going from 30-odd miles in a day to 40-odd miles really be? And besides, I needed to renew my library books. Seriously, what could possibly go wrong? I even thought to pack some sandwiches.

I should probably put you out of your misery now, and admit that I never actually reached the square. Empty squares don’t have roads through them – of course – and nor do they generally have roads anywhere near them. What looked like a road on the map turned out to be a bumpy forestry track, and another promising looking footpath ended blocked by a fallen tree and was pretty much a mudbath anyway. By this time, I’d already cycled 20-odd miles and had realised I’d be right into the wind all the way back and was losing interest in the project. I did manage to glimpse, through the trees, an expanse of what looked like nothing much. Although whether it was actually a whole square of nothingness, I couldn’t in all honesty say. 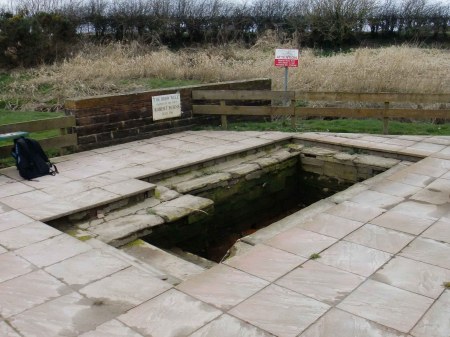 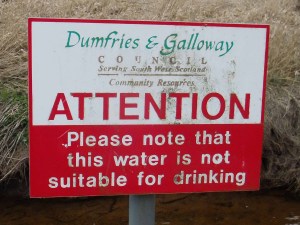 Stick to the whisky, Rabbie

I did manage to stop off at Brow Well, one of the many places Robert Burns has drunk in, but probably the only one that wasn’t a pub. According to the sign, his doctor had sent him there, perhaps in the hope that by taking the waters he might lay off the booze for a bit. Given that the poet walked three miles to find a pub that would sell him a bottle of port, this might have been a forlorn hope. And besides, if the sign at the site was anything to go by, Burns would have better off on the booze.

And then there was nothing for it but to turn around and cycle home. The difference between 30-odd and 40-odd miles is, I’ve discovered, a world of pain for the last 7 miles. My back hurt, my legs hurt, my neck hurt, and my hands only didn’t hurt because they’d gone numb. There’s clearly a lot more to this ‘quirky places to visit on your bike’ blogging lark than meets the eye, and I’m going to leave it to the expert from now on. My only piece of advice that I can give you after all this is that if you’re going to go on a long bike ride, leave the library books at home.