So, a mere 14 months after the Scottish Government – at some expense, albeit not directly to us – installed fibre optic cables right up to our front gate, we are now connected up to the superfast broadband network.* I’d blame the pandemic for the time it’s taken but in truth it’s just been that we never quite got around to it and really there was no hurry until suddenly we were all in lockdown making video calls and it was impossible to get an installation (see also: not bothering to book an eye test because there was no rush and now there’s a six month waiting list and my glasses are scratched to hell).

So far it’s passed the first test (still working even if it’s raining – very much not a given before) and the second (both of us on video calls at the same time) and is actually costing us less than the old service, despite being from effectively the same company, because this is 2020 and nothing must make sense by law. We’ve streamed a bit of telly, just to show willing, although to be honest the weather was just too nice last week to spend any time indoors playing with the Internet, however fast and responsive it might be. Streaming sunshine beats streaming video any day of the week.

With impeccable timing, the ability to video conference with people who don’t look like characters from Minecraft has also coincided with my first actual in-person meeting since March. Having postponed it once already, I was determined to go come hell or high water (both equally likely at the moment) but the weather actually played ball this time and I had a lovely and impeccably socially distanced meeting with a community group who have taken matters into their own hands and are just funding their own cycle path to join two communities, without waiting for the coonsil to get around to it. Never underestimate the ability of a group of people who don’t know how difficult something is to do, to just go ahead and get it done.

It’s clearly a ridiculous waste of time to cycle a 24 mile round trip for a 90 minute meeting, especially when there are plenty of digital alternatives – but as their community just happens to be on one of my favourite routes, I was prepared to make the effort (are you bored of my photos of back roads yet?) And it was also refreshing to remember what it’s like to talk with a group of people who aren’t all trapped in their little video squares, grappling with their mute buttons. If meetings under the new normal could be guaranteed only to take place in beautiful gardens overlooking a fabulous view on a pleasant (adjusted for Scotland) summer afternoon, then I’m prepared to adjust. October’s going to come as a nasty shock, isn’t it? 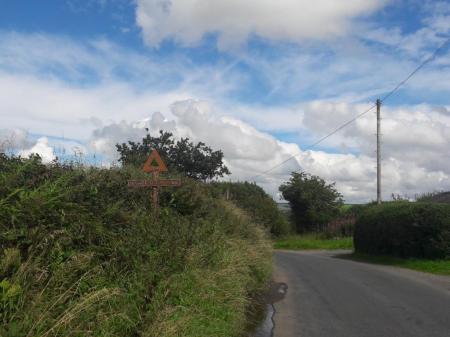 * Actually more like the superfastish broadband network because when you’re used to getting 3Mb/s (and that was an improvement over the speeds in our last place), paying extra for anything over 50Mb/s felt like an extravagance too far.

For Those in Peril Up a Pole

So, I’d like to say that it was a hardship today being the one who had to wait in for the Openreach engineer to come and sort out the fact that we’ve had no landline since before the new year and crappy internet since the last deluge – but given today’s forecast was similarly grim, it would be a complete lie. True, I had to cancel a regular appointment and I would be missing out on a bike ride but I probably would have done that anyway, frankly, given the weather.

Instead, after the engineer had been, pronounced there was indeed a fault on the line, and headed off in search of it, I had a moderately pleasant and productive morning sitting in my nice dry study watching the rain being whipped sideways across the fields and working around our on-again, off-again connectivity. Our intermittent internet has been pretty annoying over the past few weeks, especially as I work from home and do actually need a decent connection for much of my activities (but also, if I’m honest, because I like to waste far too much time on social media). However, I have been gradually learning how to spend the down time doing productive work where that is possible, which it mostly is, and when that fails, turning to things which might actually be a bit better for my general wellbeing than arguing with people on Twitter about why it’s counterproductive to argue with people on Twitter (Reading books! Actually reading the newspaper! catching up with my knitting!).

Despite this, I’m not going to pretend that I didn’t want reliable broadband back – although I do have to admit feeling a mild twinge of guilt when I looked out the kitchen window as I made myself a coffee and watched the engineer battling with his ladder in the wind to climb up poles in the rain all so I could watch cat videos and argue about cycling with total strangers. Remind me next time I’m moaning about the freelancing life, or getting a bit damp on the bike, that at least I’m not a telecoms engineer…

I love work, I could watch it for hours

Oh, and nothing to do with the rest of the post – but if you live in Scotland and would like to see the government investing in transport infrastructure that isn’t just ever more roads then could you please head over here before Friday and let them know?

Those Internet Problems in Full

It’s no surprise, living as we do on a rural area, that our broadband (technically it’s not even broadband apparently as we barely get over 1 meg) is a bit rubbish. Normally we grin and bear it, and concentrate on the many benefits of rural life from hot and cold running views to quiet bike-friendly roads. But recently, as well as being slow, it’s become increasingly unreliable, with the connection disappearing intermittently several times a day.

After a few weeks of observation, I think I have come up with a fairly exhaustive list of all the things that make our internet connection drop:

* Miserable wet weather
* Windy weather
* Sun going behind a cloud
* Phone ringing (bonus points if it’s a robo call about the ‘National Database’)
* Someone coming to the door
* Trying to upload a large file
* Trying to upload a small file
* Trying to urgently email a client to let them know that I’ll get the file to them as soon as I can
* Adding photos to my blog
* Visitors in the house who would like to check their emails
* Visitors in the house who were just going to check how long it would take to drive to the ferry
* Visitors in the house trying to use the internet to settle an argument
* Trying to do anything that involves me saying ‘I’ll just quickly finish this and then I’m done’
* Finally getting round to sending that important email I’ve been putting off for ages
* Last check of emails before going to bed, culminating in a further half hour of fruitlessly pressing the refresh button before climbing into bed at midnight
* Idly checking twitter just before going to bed, culminating in ten minutes of watching my phone give me a blank twitter screen before remembering that Twitter never says anything sensible after midnight anyway
* Thinking I might pop up an amusing blog post about how rubbish our internet connection has been
* Attempting to run a Scotland-wide election-related campaign that involves updating a dataset every night

In a sane and rational world, I would respond to any of these by simply getting on with the many things I have to do that don’t require the internet, and gosh how productive I’d suddenly be. However, and I’m sure that there’s a psychological reason for this, once I’ve started to try and do something – even if it was only to see if anyone had found my latest bon mot on Twitter amusing – then that is the thing I absolutely have to do until I’ve completed it.

Suggestions for upgrading either our internet or my brain warmly welcomed. Well, short of moving back into anywhere where we don’t have cows for neighbours – let’s not go mad.

Me: there’s a house for sale in [village x] that might be worth a look

OH: [village x]? Isn’t that where our exchange* is?

Can you tell we’ve been having problems with our broadband recently?

*For those not familiar with rural life, when you tell anyone who knows anything about broadband that you live five miles from the exchange, normally all you get is a sorrowing yet sympathetic look and a pat on the shoulder. Still, our views are nice.

I had an Important Document to send off today so I took it down to Papershop Village knowing that the feral post office was supposed to be putting in an appearance there this lunchtime. I was feeling pretty pleased with myself at having remembered the post office schedule AND the Important Document, and rolled up outside the village hall where the post office makes its appearance just as it was due to open. The post office not being there yet, I went into the shop, got my paper, exchanged the statutory amount of banter, and went back out to find still no post office, but a couple of people waiting in their cars for its arrival. Fifteen minutes later, having checked with the shop and found that yes, it was supposed to have been open fifteen minutes ago but that it was a bit of a law unto itself, I decided to cut my losses and cycle home and send the other half to Notso Bigtown with the Important Document tomorrow instead. And thus are the rural postal services maintained, with maximum inconvenience to all concerned until finally the last customer gives up and they can quietly kill the whole thing off.

But never mind those old dead tree technologies, for the other half came back from Notso Bigtown last week with the exciting news that we are to get superfast broadband some time ooh at least this century. There was some sort of information stand about it in the supermarket car park and he had given them our postcode and been told that we would be having fibre put in ‘right to the premises’.

‘I’m not holding my breath,’ the other half said when I expressed some excitement at the prospect of being able to watch unlimited numbers of cat videos (and, indeed, get a nice smooth strip of tarmac all the way up our road to ride my bike on, which is almost as thrilling). ‘But I did get a free pen.’ And indeed, having checked the website it appears we are included in the ‘rest of Scotland’ part of the project, not a phrase which fills you any great sense of urgency. I did have a look at the map of the planned roll out and found that it would be much more helpful if anyone had bothered to label it with the names of the exchanges (or indeed, with the name of anything) so, as I have foolishly failed to memorise the shape and size of the area our exchange covers, I can’t quite work out if we’re getting our superfast broad band by the end of this year or sometime in 2017. I then tried to look on the BT site but that had an interactive map on it which – stop me if you’ve worked this one out already – doesn’t load all that well if you’re using rural broadband.

Still, at least we have our free pen. I could even use it to send letters while we wait to be connected to the 20th century, if only I could work out where our post office has gone.