A Voyage of Discovery

There has been far too much Gadding About going on in recent weeks, which is fun and everything, but tends to involve too much in the way of getting up early and coming back late and not enough in the way of pottering. Today was still busy in that I had things to get done, but I didn’t have to actually be anywhere and the day was suddenly mild so the garden – and more particularly the greenhouse – called.

I feel a bit at sea with the greenhouse. I’ve never had one before and while the mediterranean climate part is nice to visit, it’s a bit daunting having something that – unlike the rest of the garden – doesn’t water itself. I’ve also realised that my normal outdoor garden habit of dumping a load of manure on the beds and letting the worms do the work over winter won’t work if there’s no worms. There’s also the worry of it getting an infestation of the sort of thing they’re always issuing Dire Warnings about on Gardeners’ Question Time, like vine weevils). Fortunately, my gardening pal from the village stopped by with his seed potato order for Potato Day and has given me the benefit of his wisdom (I think he’s a bit scunnered that I’ve got my hands on a greenhouse twice the size of his for free out of pure dumb luck but I think he realises his laurels at the village show are fairly safe so hopefully his advice is still sound). 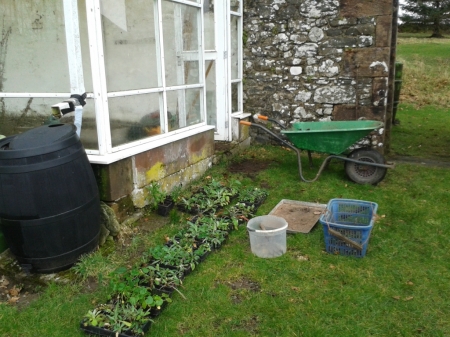 Anyway, today was spent testing both my pal’s advice to dig in plenty of organic matter, and the handiwork of my hernia surgeon, by hefting barrowloads of compost about, and giving my Project Random Perennial plants a little holiday of a day trip to South West Scotland in the drizzle so they can start the long road towards hardening off.

As an aside, I’ve discovered the archive of podcasts of the Life Scientific in recent weeks, meaning I can head up into the garden for an hour or so whenever it’s convenient without having to dovetail with the listenable bits of the Radio 4 schedule and can do my pottering while eavesdropping in on a fascinating and agreeable conversation between two very clever people. This has been an eye opener (and not least because the producers seem to have found a 50:50 ratio of male and female scientists to interview without making a huge fuss about it). It has reminded me of what I used to find fascinating about my old job, before we had an infestation of consultants, a pest almost as ineradicable as vine weevil. Not that I did any actual science, but I did get to talk to a lot of clever people that did and then build things for them that helped them do it better. Obviously a job as simple and as satisfying as that was never going to last in today’s enlightened times – where are the boxes to be ticked? How can progress be measured and managed? – but it was pretty damn good while it did.

Storm in a D-cup

I cannot let today pass without mentioning that today is boobquake. In the name of science, women are invited to dress as immodestly as they can, in order to see whether it does, indeed, cause an increase in the number of earthquakes. Sadly, as I’m not particularly endowed in that department (and the day I was patted down in Belfast airport by the security chap as he had taken me for a boy and he didn’t notice his mistake is still engraved upon my soul. I grew my hair after that), I’m not sure my puny cleavage will add to the effect. But if the sun comes out any more I’m planning on taking off my jumper and believe me, that’s quite a step for Scottishkind.

If you’re reading this and you’ve got the wherewithal, join in! It’s science! And besides, it should be fun. Thanks to Aviatrix to the heads (or some other part of the anatomy) up.