As we woke to another freezing morning, the other half offered to pick up the paper as he was heading into Bigtown, but I decided against. Not only have I not had a decent bike ride since Tuesday – and not to mention gone to some effort to change my bike’s tyres – but a comment yesterday had led me to this blog, being the seriously challenging winter cycling adventures of an indomitable lass in upstate New York, who appears to think nothing of cycling to work through sub-zero (that’s sub-zero Fahrenheit) temperatures at 4:30 in the morning and who feels positively cheated if the snow plough gets there before she has had a chance to break through the virgin snow herself.* So merely avoiding going out because it was a bit nippy seemed a bit feeble, and even when I started to get ready to head out and saw that it was snowing lightly I wasn’t going to be put off by a dusting of snow.

Heading out to Bigtown, with just a light accumulation of snow at that point

At the same point on the way back, there was rather more…

Fans of the Weather Gods will know what happened next: it started snowing in earnest. Still, clad in lobster gloves, scarf, fleece, boots, ear warmers and, of course, my tweed cap, (I imagine cyclists in New York would laugh to hear it was just a couple of degrees below zero) I was warm enough. I’d chosen the fleece, which is green, thinking it might make me a bit more visible than my brown waxed coat, but that was a bit of a tactical error because it (and the cap) just got immediately coated in snow so I ended up nicely camouflaged. Still, anyone cycling in this weather automatically comes with a giant sign saying ‘NUTTER’ which hovers like a fifteen foot fluorescent flag over their head, so the few cars I did encounter could see me anyway, and rather better than when it’s raining when I apparently disappear. The tyres did their job, the bike performed fine (with the odd ‘interesting’ gear change once the snow had built up on the derailleur) and I got into Bigtown and back feeling just a tiny bit pleased with myself, even if it had taken me an hour and a half to cover ten miles. 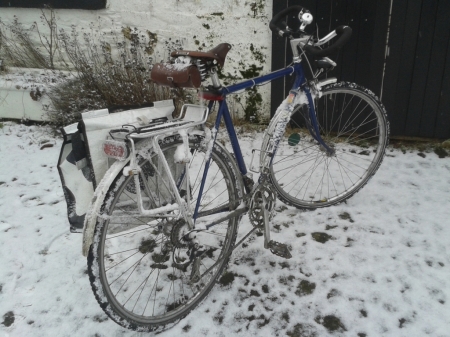 Of course, some of that time might have been spent stopping to take photos…

The snow has continued ever since and is still falling. Tomorrow might be interesting.

* Copenhagenize’s coinage for the winter cyclists of Copenhagen, who at least have the luxury of their own cycle tracks which are actually ploughed and gritted. Perhaps we need another term for those of us who plug on regardless without such luxuries. #SaxonCycling has been suggested on Twitter but I think the UK equivalent should be #StiffUpperLipCycling

** Or as the other half put it, seriously impressed, ‘there’s someone even madder than you on a bike’.

This entry was posted on Saturday, January 16th, 2016 at 8:11 pm and is filed under Cycling, Weather. You can follow any responses to this entry through the RSS 2.0 feed. You can leave a response, or trackback from your own site.